After Nobel Laureate Toni Morrison died just a few days ago, I thought a lot about what her work meant to me, and I read a lot of tributes to her. The piece of writing that struck me most is this letter by nonbinary writer/ogbanje Akwaeke Emezi:

The elderspirit of you leapt into my head the day Professor Mayes played a VHS tape from her archive of an interview you gave after you won the Nobel Prize.
‘I stood at the border, stood at the edge, and claimed it as central. Claimed it as central, and let the rest of the world move over to where I was.’
Your words reached like an arm of fire out of that television screen, and I swear they were just for me. This is the you I know. It is no small thing to give a being like me language.”

Their letter was published by Them.

The letter may be the most beautiful, center-challenging – and in that combination most Morrison-like – piece I read these days. Morrison’s writing meant a lot to me, but I can barely start to understand what she meant to people who live closer to the edges than I do. 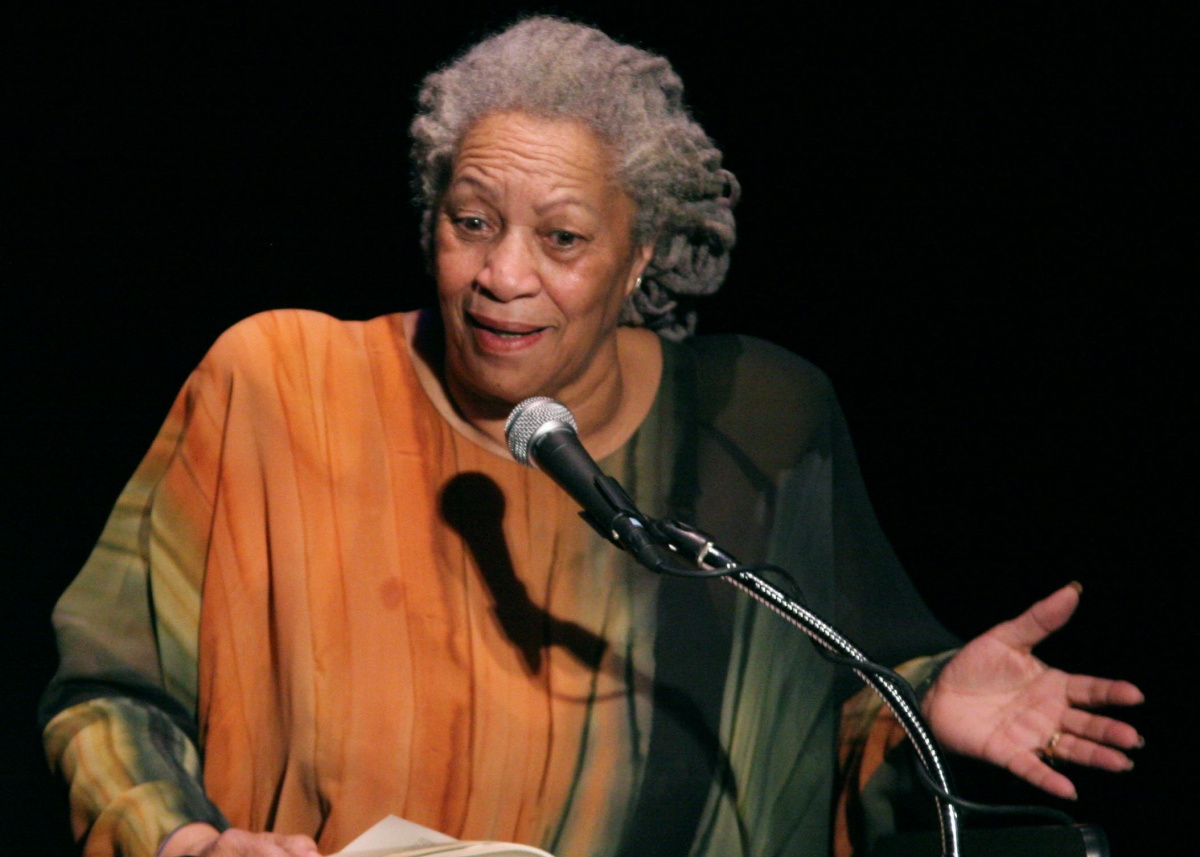 It’s as though you’re in a laboratory and you’re working on an experiment with chemicals or with rats, and it doesn’t work. It doesn’t mix. You don’t throw up your hands and run out of the lab. What you do is you identify the procedure and what went wrong and then correct it. If you think of [writing] simply as information, you can get closer to success.

Her new essay collection, The Source of Self-Regard, was released last week in Germany and I can’t wait to delve in.

August’s been a pretty good month reading-wise. I finished a novel and read another for the #2016classicschallenge – Ingrid Bachmann’s Malina and Toni Morrison’s Song of Solomon – and a wide range of other books:

I picked up this book at my parent’s one weekend in July, and decided to read the novel as my July #2016classicschallenge. Malina is the first novel of Austrian poet and writer Ingrid Bachmann. It’s excellent, a love story of sorts and also an exploration of language, self, mental health, and the post-WWII generation told through the first-person narrator, a woman writer living in Vienna with her roommate Malina. The narration is so complex, intimate and intensive that it took me awhile to get into it and was hard to finish (for personal reasons) but I definitely recommend it.

Dave Zirin: Brazil’s Dance with the Devil: The World Cup, The Olympics, and the Struggle for Democracy

Dave Zirin is maybe the most interesting sports writer today. His blend of sport reporting, class analysis and leftist politics here comes in form of a report on the impact of the 2014 World Cup and 2016 Olympics on the people of Rio. The book includes a brief, concise history of Brazil, and I was especially impressed by the way Zirin connected Naomi Klein’s Shock Doctrine to the sports sphere.

I can barely believe this memoir is true. The childhood story of journalist and writer Jeannette Walls is one of abject white poverty, both neglect and love by her parents. The layers abuse sometimes made me so mad that I could barely keep reading, but Walls prose is so enthralling that I stuck with it. Overall it’s a coming of age story of a future gossip journalist that could be the plot of a Toni Morrison novel. The role of reading as escape, escapism and as habitus marker alone is fascinating.

My August classic, and one of the novel mentioned by the Swedes when Morrison received her Nobel prize. I’m always awed how compact her narrative and prose is. In this comparatively brief novel, Morrison tells about a century of African-American history, posits questions of race, gender and family, the role of lineage, death and love in Black communities, and creates  complex, messy characters. Perfect.

An odd book to follow Morrison for a number of reasons. Paul Beatty’s novel about a man in the agrarian hood of Dickens in LA county who wants to bring his town back on the map and in the process unintentionally becomes the master a slave and intentionally (faux) segregates the neighborhood is being hailed as one of the best satires of recent time. I don’t really agree.  I don’t think the book is that well written, the scorching snide side remarks and references are at times just packed to tightly, and the book does make a lot of use of the nword (always ending in -er. never in -a) and reproduces a lot of racism and sexism. I know that that’s the point, but sometimes he overdoes it. Also, I’m not so sure if it’s a satire at all. A lot of the book is hyperbolic and satirical, but I didn’t read it as hysterical or humerous as a many (also white) critics did. At first I thought it really was supposed to be “Swiftian satire” as one of the blurbs claims, but halfway through I started reading as more angry than entertaining. It does critique pretty much every contemporary aspect of U.S. society, both mainstream and Black, and once I understood it to be a extremely eloquent “Shit’s Fucked Up and Bullshit” sign, I connected to it more.

‘Toni Morrison, writer and the first Black woman to be awarded the “Nobel Prize in Literature,” was born in Lorian, OH, on this date February 18, 1931. Morrison received the “Pulitzer Prize” for her book, Beloved, in 1988.’

Happy birthday to my favorite writer Toni Morrison and to Audre Lorde, another gifted and talented writer. – Mabinty

(Posts about Toni Morrison on my blog)

Happiness is not good enough. Don’t rest on happiness. I mean it’s okay and I hope you are all happy, but we got to do more than that.

with Angela Davis on libraries, literacy, and liberation (and so  much more) The discussion was republished this week as an episode of the New York Public Library podcast. I highly recommend listening to it.

I think this quote stuck out to me the most because it rejects the centering of personal happiness as the ultimate goal. This rejection opens up the possibility of living a valuable, important, interesting life without having to be happy. Happiness is great, but it’s not the only thing that matters in life.

Critics generally don’t associate Black people with ideas. They see marginal people; they see just another story about Black folks. They regard the whole thing as sociologically interesting perhaps, but very parochial. There’s a notion out in the land that there are human beings one writes about, and then there are Black people or Indians or some other marginal group. If you write about the world from that point of view, somehow it is considered lesser. We are people, not aliens. We live, we love, and we die.

Apart from being an on-point observation by the great Toni Morrison, this quote struck me as topical in two ways.

It reminded me of an interview with Saul Williams on the entertainment and pop culture podcast Studio 360. He talked with host Kurt Anderson about the early cancellation of Holler If Ya Hear Me, the musical based on the music of Tupac Shakur, axed on  Broadway after just one month. He made a similar point to the quote above: A lot of the bad reviews came from critics going into the performance with preconceived notions about what a “Tupac musical” will be like, expecting some kind of 90s gangsta reenactment. Critics who focused on what was actually happening on stage gave much more favorable reviews. The culture clash that led to the early closing of the musical wasn’t on stage –  Saul Williams convincingly made the argument that rap, especially narrative, story-telling rap, is a good basis for a musical play – but in the audience. Broadway audiences aren’t quite ready.
Saul Williams also argued that the theme of the musical, young Black struggle and violence, is still a current problem. That’s my second point, representation of poor, young Black life in middle-American pop culture is still rare, problematic, and desperately needed. Literally: The current events in Ferguson and their mainstream media coverage are insult and second injury to the local community, revealing deep, racist wounds in American everyday life.

Word-work is sublime, she thinks, because it is generative; it makes meaning that secures our difference, our human difference – the way in which we are like no other life.

Matt de la Peña, wrote a short, beautiful essay for NPR’s Code Switch blog on the hope and perspective reading and writing can give struggling teens and adults from difficult backgrounds like macho working-class or street gangs:

My professor said something I will never forget when I went and talked to her the following week. Even in the harshest and ugliest of circumstances, she explained, there’s still hope. That’s what she loved most about The Color Purple.

It’s what I loved most, too, I decided.

I immediately went in search of other stories that might move me, too. I read all the novels I’d skipped in high school. I read novels by black female authors like Toni Morrison and Zora Neale Hurston. I read Ruth Forman’s first poetry collection so many times I had every line memorized. And when I discovered Hispanic writers like Sandra Cisneros and Junot Díaz and Gabriel García Márquez, it was over. I was hooked. Novels became my secret place to “feel.” My dad and uncles didn’t need to know about it. Neither did my teammates. But I could sense something happening inside of me: reading was making me whole.

“When I’m not thinking about a novel, or not actually writing it, it’s not very good; the 21st century is not a very nice place. I need it (writing) to just stay steady, emotionally,” she says.