Boost the shit out of this, we got to let the truth be shown

Racists ruined their perfectly nice neighborhood event and the black kids got slammed to the ground for it. Terrible.

Not sure what to make of this:

Gabriel García Márquez, who died in April at 87, was a strong critic of American imperialism who was banned from entry to the United States for decades, even after “One Hundred Years of Solitude” vaulted him to international celebrity and, in 1982, the Nobel Prize in Literature.

But now García Márquez, who was born in Colombia and lived much of his adult life in Mexico City, has “gone to Texas,” as they say.

The Harry Ransom Center at the University of Texas in Austin will announce on Monday that it has acquired García Márquez’s archive, which contains manuscripts, notebooks, photo albums, correspondence and personal artifacts, including two Smith Corona typewriters and five Apple computers.

Sure, places like the Harry Ransom Center certainly are capable of cataloging and preserving the estate for future study, discovery, and reference. The Center also holds collections of numerous other (non-US) literary greats. Based on that, the center director thinks it is fitting that García Márquez joins this great location, and that it will be “almost as if [Joyce] will meet [Márquez].” I’m sure the sale is legal and the writer’s family made the decision in their best interest.

But still, some aspects of this rub me the wrong way. In our technological age, is it really necessary for scholarship and research across writer’s works to have their estates in the same place? I don’t think so.

Addtionally, as the NYT article states, Márquez was critical of US-American imperialism and (neo)colonialism. He also destroyed most of his private notes so they could not be rummaged in posthumously. It is ironic and/or highly problematic that his letters are now moving from Colombia or his later residence of choice Mexico City to the US in a way that is similar to the way countless e.g. Egyptian or southern African artefacts have moved from their places of origin to Great Britain in the name of preservation and scholarship.

I am sure people at the Harry Ransom Center and the University of Texas at Austin do great work, and I’m certainly in favor of intercultural literary scholarship. But “García Márquez has gone to Texas” just doesn’t sound right through a postcolonial lense.

All my love to Texas Senator Leticia Van de Putte.

This is the moment that spurred the crowd on to cheer and continue cheering to wear down the clock and prevent the bill from passing.

There were other heroes on this day too, let’s not forget her, especially since the Democrats are apparently trying to give her quote to Wendy Davis.

Saw her featured on the Rachel Maddow Show. She, like Wendy Davis, and so many protesters, is amazing.

Let me guess, Senator Van de Putte will also be gerrymandered out of her seat, thanks to the VRA decision?

[Gif of George Carlin doing stand-up, raising his left middle finger. Captions read. “Boy, these conservatives are really something, aren’t they? They’re all in favor of the unborn. They will do anything for the unborn. But once you’re born, you’re on your own. Pro-life conservatives are obsessed with the fetus from conception to nine months. After that, they don’t want to know about you. They don’t want to hear from you. No nothing. No neonatal care, no day care, no head start, no school lunch, no food stamps, no welfare, no nothing. If you’re preborn, you’re fine; if you’re preschool, you’re fucked.]

Case in point: While Republicans in the Texas Senate were trying to push through a "prolife” anti-abortion law, the state was also preparing to execute Kimberly McCarthy, the 500th person to be executed in the sate since 1982. See also: School closings, abstinence only sex ed, tying food stamp and welfare programs to the performance of children in school, etc 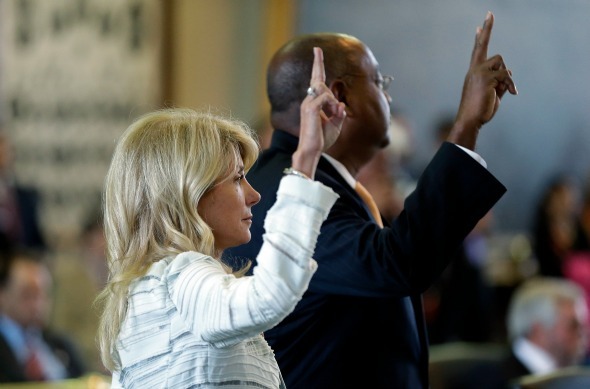 Thanks to the Supreme Court, Wendy Davis will probably lose her seat.

(This Republican obviously thinks that’s a good thing, because he thinks she’s a “terrorist")