I couldn’t express my annoyance with this in only 140-characters, so here’s a short blog post:

For his part, Mike Pence is also very, very committed to ensuring that there’s never even the slightest appearance of impropriety with regards to his marriage. To achieve such a feat, Pence reportedly won’t have dinner alone with a woman who is not his wife; he also won’t attend any events where alcohol is served unless Karen is by his side.

For the record: I’m really, really close with my wife. I love hanging out with her. I also love having dinner with female friends alone. Okay, being a former English major I otherwise would’ve starved alone in my room…

Seriously, some of my best friendships are based on having dinner – drinks included. Many of those nights felt intimate, sometimes we even talk about intimate topics – and yet, I don’t cheat on my wife. Penceites must be so confused.

I even think that having dinner with women who are not my wife make me a better husband/man/person. Through these 1-on-1 dinners and talks I get to hear stories and perspectives from women who are different than my wife (or mother) and this helps me being less ignorant. Less clueless when it comes to women’s issues in general. When I see how Pence and his ilk talk about women, their healthcare, and sexuality, I’d recommend that they have dinner with women who are not their wife more often. This whole thing is completely absurd once you add the fact that gender isn’t a binary and not all people are heterosexual.

I think it’s perfectly fair to disagree with Clinton on her policies. But to call her a bitch? To talk about her being murdered? Even to talk about her personal life and her marriage, I just find it deeply misogynistic. […] And it’s not just making others to be comfortable in their misogyny – what it does is that it gives them an opportunity to say, ‘It’s not because we’re misogynistic. It’s not because she’s a woman.’ And that’s even more troubling.

Chimamanda Ngozi Adichie: Clinton Is Above Trump – The Cut

Women usually exist in men’s songs as passive objects, which is to not exist at all. With Prince, they were addressed with both awe and empathy. He wrote about women as real, powerful, complicated, sensitive, and sexual beings that he could learn from, and who enriched his life. These sentiments weren’t hidden away in the B-sides or sandwiched between hit singles either, they were front and centre on his hits.

Treating women with respect should not be contingent on whether or not it ‘gets you somewhere.’ Women have value even if we are too fat or too ugly or too loud or too standoffish or too homosexual to serve a ‘purpose’ for men. Women are people.

Schilling’s anger is so relatable. It would be hard for a parent to hear his description of Gabby’s day — thinking her college career was over before it began — and not be outraged. Yet here is what’s difficult about the reality many women face: Had an unknown 17-year-old called a university herself and contended that a student was harassing her online, would she have gotten the same attention? Would her troll or stalker been kicked off the team?

Schilling didn’t tell me the names and identities of the men he found, so it was impossible to verify that the correct perpetrator had been linked to a specific tweet. But someone wrote those words, and for Twitter and other Internet companies to treat the digital equivalent of “Fire!” in a movie house as protected speech, under the umbrella of free exchange of political thought, is disingenuous.

Violent speech on the Internet should be treated like threats made in any other manner, and it should be wrong across the board. If targets of abuse have to wait until every famous father has this issue intersect with his real life, that’s a long wait. 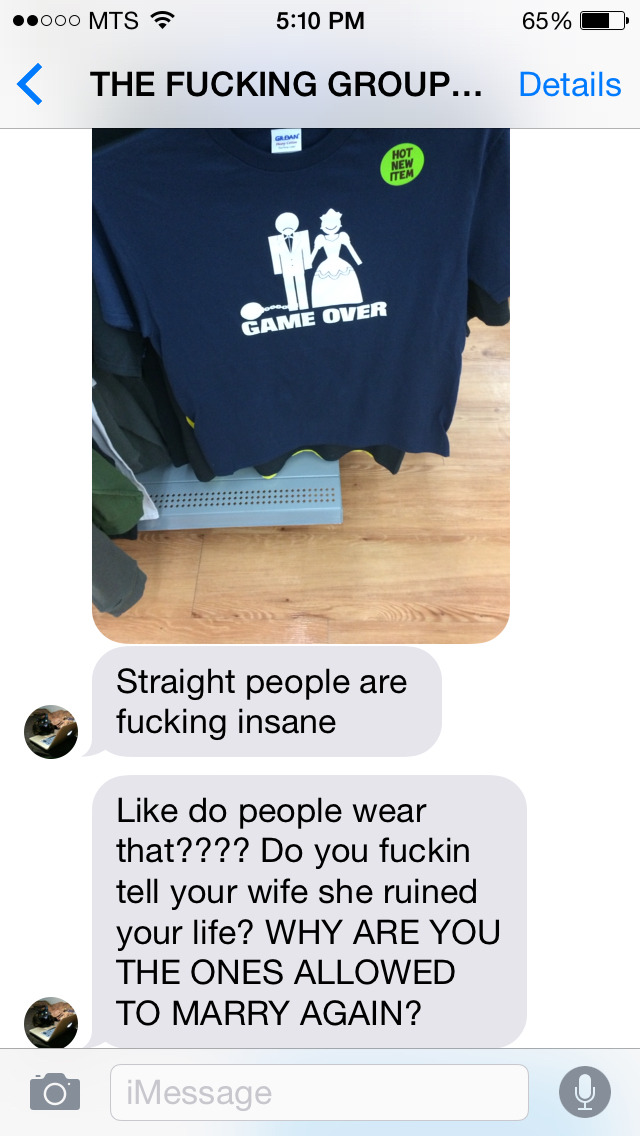 These always confuse me like typically the man proposes, so if you don’t want to get married then why do you do it???

Yes, this. I’m a cis man married to a woman and I never understood this kind of “joke”. Same goes for calling the the bachelor party a “last night in freedom.” If you’re so terrified of marriage, don’t get married. The benefits aren’t *that* great.

GamerGate – the movement of digital backlash by dudes who take gaming too seriously so they are angry at women* who take a serious look at gaming – hates crowdfunding for a very specific reason, argues Katherine Cross at feministing:

Crowdfunding means that someone challenging the status quo can get an income. Without being beholden to the sclerotic interests of the industry at large, they’re free to make games how they want, criticise how they wish, and write without fearing advertisers. It is that efflorescence of speech which scares GG, because it means they can no longer rely on the industry to snuff out dissent on market-unfriendly political issues — be they talk of working conditions in the industry or frank engagements with the discourses of race and gender in gaming, or critiques of aspects of gaming’s consumer culture.

Isn’t it awkward when professional bloggers don’t understand how social media works?
A few days ago, widely read conservative white-but-not-straight blogger  Andrew Sullivan railed against the new cooperation between Women Action Media and Twitter. The micro-blogging platform and the non-profit will work together to better report, track, understand, and work against cyber harassment of users, primarily women. That this harassment is omnipresent should be common (bipartisan!) knowledge to anyone actively engaged with the net these days, at least since #gamergate. Sullivan sort of supports #gamergate, so it’s no surprise he now fears full-blown censorship at the hands of a radical leftist feminism. But still, this article is problematic and full of terrible arguments:

Instead of seeing the web as opening up vast vistas for all sorts of voices to be heard, they seem to believe it is rigged against female voices, or that women are not strong or capable enough of forging their own brands, voices, websites and fighting back against ideas they abhor with wit and energy and passion and freedom. Instead, WAM’s goal is to police and punish others for their alleged sexism – along the well-worn lines of contemporary and controlling left-feminism.
[…]
Somehow, I suspect the culture wars online just got a little more frayed. Because Twitter has empowered leftist feminists to have a censorship field day.

Sullivan so royally (and probably willfully) misses the point, I almost feel embarrassed for him. The action WAM and Twitter takes isn’t censorship at all, even if you expand the concept from its actual constitutional definition (relationship State – citizen) to the more colloquial use (individual/organisation hindering other individual/organisation from expressing something) It’s not even really censorship in a discursive/Bourdieuian sense in which a field governs itself and has certain rules (explicit and implicit) about what can be said within that field/space, etc.

At least at the start, no one is actually prevented from exercising free speech – it’s just a method of protecting yourself from harassment. The harassment that is supposed to be reported through this new cooperation certainly is “low-level” speech, if not true threats or hate speech, i.e. forms of speech that are usually not protected by even the very wide scope of the U.S. First Amendment.  It’s also not about coddling weak women from improper words or from abolishing unpleasentness or dissent or any nonsense like that.
This move by WAM with the support or twitter and numerous other feminists and their allies certainly doesn’t mean that the activists think that women aren’t strong. Women are strong: Most women deal with street, cyber, sexual harassment and sexism on a daily basis and still work and prosper. This is especially true for non-straight, non-cis, non-white women in the USA, online, and around the world. This initiative by WAM and others is actually an example of the resourcefulness of women online: They are creating apps and strategies themselves that allow them to better experience and use the “vast vistas” of the web, that allow them to build their brands and that give them the space to express their ideas “with wit and energy and passion and freedom” and to have constructive discussions with people who disagree with them. Because that is the free speech problem that is pressing here: A constant, daily barrage of hate and harassment like amazing blogger Imani Gandy describes it not only leads to personal harms (e.g. mental health issues, constant insecurity, further abuse) but also amounts to a “white noise” that drowns out reasonable interaction. Twitter isn’t technically rigged against women, but it is more difficult to interact when part of the interaction is people yelling abuse at you.
Another point: Isn’t finding strategies and technological solutions to enhance your communication possibilities what social media, what the digital revolution is supposed to be about? Reducing the white noise of hate allows women to fully participate as “citizens in our digital age.” (Yang in Citron 2014)
Sullivan (of course) invokes the “culture wars.” There is a cultural conflict at play here, but it is not a new one. It is the decades, century-old debate about who is a/the “citizen.” The core problem is this: The individual citizen whose freedom of speech must be protected from the “censorship” of WAM, Block Together, or ordinary comment moderators, is still very much the citizen the 18th centruy. Those being silenced (or, if you buy in to the other side, doing the censoring) are people not considered citizen (i.e. civil right holders) by the authors of the constitution: Women, people of color. (Even LGBT people, in the present case Sullivan ignores that.)  Of course, free speech debates aren’t limited to the U.S., and in the case of speech on the Internet, many of the nation-state based elements of “citizen”-subjects don’t apply. Many individuals arguing the “censorship!” position in this debate aren’t U.S. citizens. But the same hierarchy of “citizen”/subject/individual/user applies: White cis-heterosexual man is the default, it is he who comes to mind when talking about censorship™.

Both the hierarchization of white-male subjectivity and the attack that feminists et.al. are policing the speech of white straight males angers me on a personal level, too. I am a white male speaking on the Internet, but I am also a white male that sees and abhors the abuse others on the Internet face. Women and others protecting themselves from abusive people who share certain labels with me does not quell my free speech possibilities. As far as I can tell Block Together and the new WAM/Twitter tool aren’t even limited to women/poc/lgbtqia people – they just need it the most.

TL;DR: This isn’t about speech, it’s about harassment. Even white dudes can get that.

And this anger — this toxic male entitlement — isn’t contained to random comment boards or the YouTube videos of disturbed young men. It’s on full view elsewhere in our culture. Earlier this week, a writer for the New York Post quoted a member of a men’s rights group as the sole source in a report on Jill Abramson’s ouster at the New York Times. Mel Feit of the National Center for Men told columnist Richard Johnson that Abramson was systematically firing men and replacing them with women. He said that our society gives women preferential treatment. On his website, Feit bemoans a culture in which men are subject to the powerful whims of vindictive women who exist on “sexual pedestals.” He argues that men can’t be blamed for rape after a certain point of arousal. These views about women and violence are replicated in our criminal justice system. They filter into our media. This is what makes Rodger’s misogynistic vitriol so terrifying — the fact that in many ways it’s utterly banal.